The Seventh th Episode Of Our Podcast Is Now Online

„I want to scream where was all this when my friends were dying!?“

Every year since 1983, on the third Sunday of May, the world observes the International AIDS Candlelight Memorial. In Bulgaria this day has been commemorated since 1992 when a group of organizations and activists take up the initiative. At the end of the article we share the memorandum of association of the initiative provided by Petar Tsintsarski – a long-standing activist and expert at the national HIV/AIDS prevention and control program of the Ministry of Health. 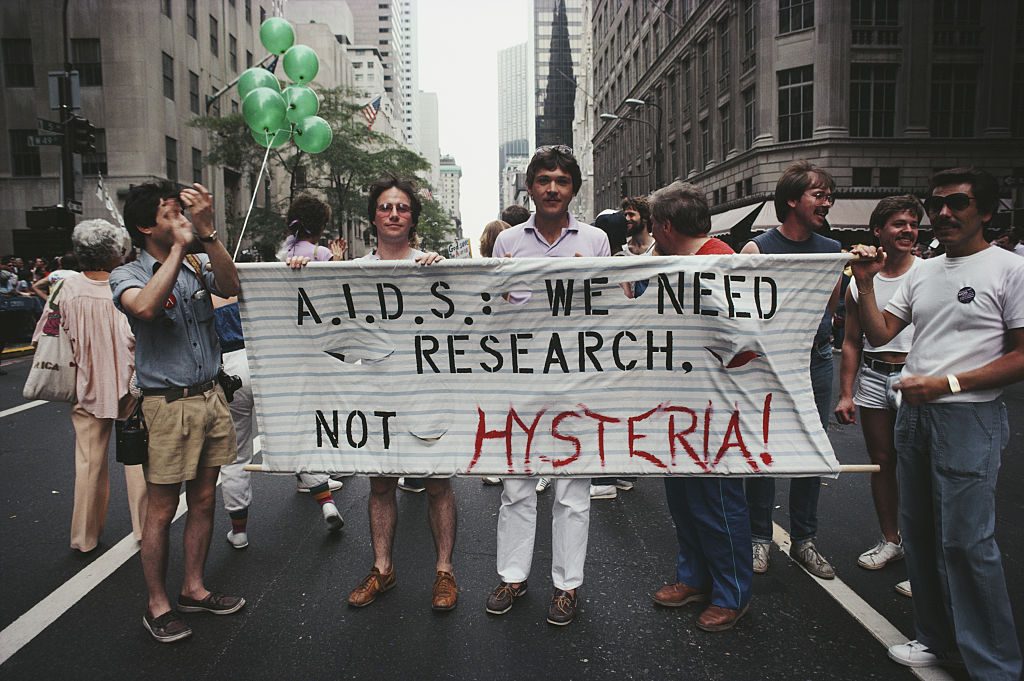 For the 28th year in Bulgaria we will light up candles in memory of those we lost to the fight with the virus and those who fought to the last breath for justice, diagnostics and treatment. The slogan of this year memorial is „We remember – We take action – We live beyond HIV“.

This year the initiative takes place in the context of an unknown new pandemic which is a reason for taking stock and make some inevitable comparisons between both epidemics.

Without this article being a historical reference, we must review some facts for the sole purpose to make a parallel between both pandemics. The earliest evidence of an HIV-infected person was confirmed only in 1986 when a retrospective analysis of previously frozen blood samples was made. In the specific blood sample from 1956 of an unnamed man from Kinshasa (Léopoldville), Democratic Republic of Congo, the HIV virus was identified. It is strongly believed that the virus had circulated even before that, but the people infected with it were a too small number to raise a concern. The AIDS epidemic exploded in the USA as early as 1980, but there are earlier reported cases in the late 70’s. The crisis progressed rapidly without any public response and in 1983 HIV-positive people worldwide were already over 1 million when the deceased were over 16,000. This caused the LGBT community mobilization and mass protesting on the streets of San Francisco and New York City. Meanwhile countries and governments stay silent…

This short story from those days, is an anecdote of the federal response to the AIDS epidemic and shows how the US government (and other countries) looked at this new “plague”. On October 15th 1982, during a regular press conference at the White House, the journalist Rev. Lester Kinsolving asked Deputy Press Secretary Larry Speakes the first public question about the AIDS epidemic. The journalist asked whether the President (Ronald Reagan) had any reaction to the announcement by the Center for Disease Control (CDC) that AIDS had become an epidemic in over 600 cases only in the US and almost half of them were dead. The speaker stated that he had no information about it and the journalist added that the event was known as the “gay plague”… The audience started laughing. Speakes mockingly said “I don’t have it (AIDS), do you?” The people in the room started laughing again! Kinsolving insisted “Does the President, in other words, the White House look on this as a great joke?” and continued asking whether Reagan or anyone in the White House knew about this epidemic. The administration speaker continued mocking by saying “I don’t think so. There’s been no personal experience here, Lester”. The audience laughed again. Speakes went even further by making a joke about homosexuality and hinting that the journalist was flirting with him while the whole audience found this entertaining. 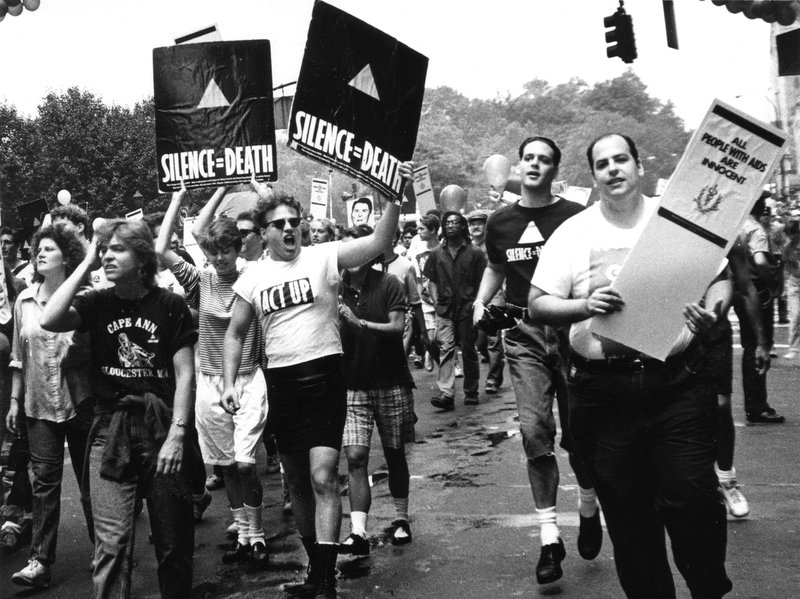 5 Members of ACT UP hold up signs and placards during the Gay and Lesbia...

The derogative tone that the administration used for homosexual men shows the overall attitude of the institutions towards this epidemic, because it only concerns homosexuals, but this did not remain the case for long. In those years AIDS and gay men have already been equated which lays the foundations of a deeply rooted stigma which will hang over homosexual contacts and AIDS for the coming decades.

Without devaluating the burden of the current epidemic, we must underline that the reaction to the HIV crisis in the 80’s, all the way to the 90’s sentenced to death an entire generation, mostly queer people. The responsibility lays on everyone – government, scientific and medical community, businesses, public institutions, the entire society. The very first HIV test was developed as late as 1985 which is 5 years after the beginning of the epidemic and tens of thousands of death cases. Why back then no one was rushing to develop diagnostic methods for years? In the same year, the officially registered people with HIV were more than 2.4 million and people on treatment – 0.

The public mobilization on all levels in response to the coronavirus epidemic is painful for those who remember HIV in the 80’s. It only took several weeks for not one, but numerous SARS-CoV-2 tests to be developed where the ones for mass application were available as early as January 2020. Immediately after COVID-19 hit, researchers started looking for a medication and therapeutic options were available only a few months after the beginning of the crisis. Many businesses invested millions, even billions in the efforts for curbing the epidemic. Almost all governments undertook emergency measures within weeks after the first death cases started. The first HIV medication – AZT was only created in 1987, seven years after the epidemic exploded when 100,000 were already dead and 2.4 million infected.

Does anyone still think that the HIV and Coronavirus epidemics are alike?

“I want to scream where was all this when my friends were dying?” burst out Kevin Jennings, CEO of Lambda Legal, a human rights organization for LGBT and people living with HIV in New York who shares in an interview his pain from the poor public reaction to the epidemic in the 80’s. Kevin is a member Single Step’s Advisory Board, which provides strategic direction and invaluable support to the organization.

Stigma, Silence and Fear allowed millions to perish in a disease which could be controlled. Between 1996 and 2017 there wasn’t a single year in which fewer than 1 million people have died from AIDS-related illnesses. The peak was between 2004 and 2006 when 2 million people left us each year.

Stigma around the gay community hindered scientific research and investment in treatment.

Silence and neglect by government officials made AIDS a shameful thing.

Fear by society made people with HIV live in the shadows.

Heroism and community mobilization of all those initially affected lesbians, gay and bisexual men, trans people, sex workers and people of color showed that together as one community we can be strong and only then we would be heard. The commemorate those people we celebrate on this memorial day and to go back in time we offer you several pictures and a performance of Elton John – „Ballad of the Boy in the Red Shoes”, which he dedicated to the epidemic.

In present days, in Bulgaria and in the rest of the developed world, treatment for HIV is accessible and free of charge for all where people with HIV have a wholesome life. But we must not forget that around the world only about 60% of people infected with HIV have access to treatment. The remaining 13 million people are deprived of it! 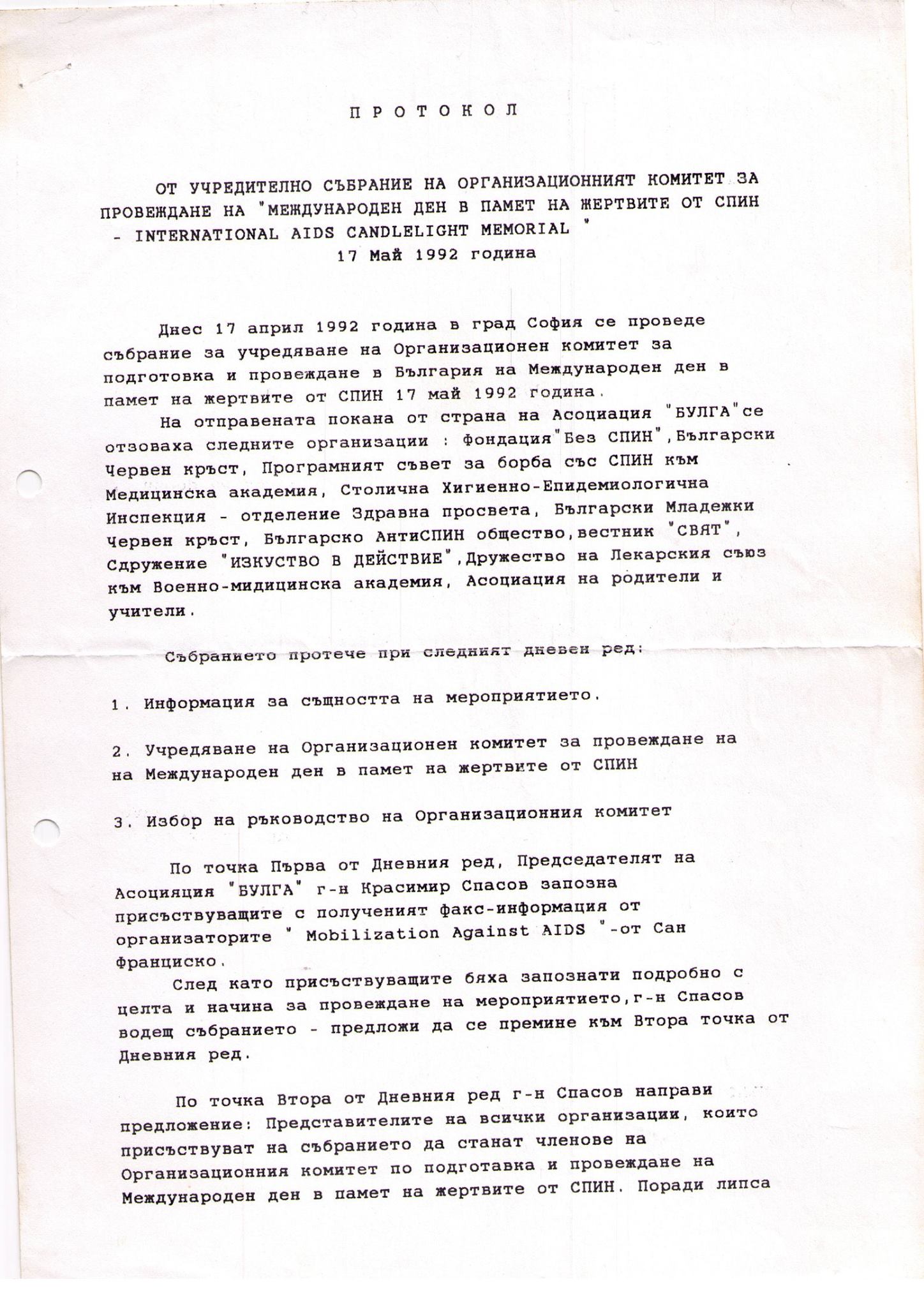 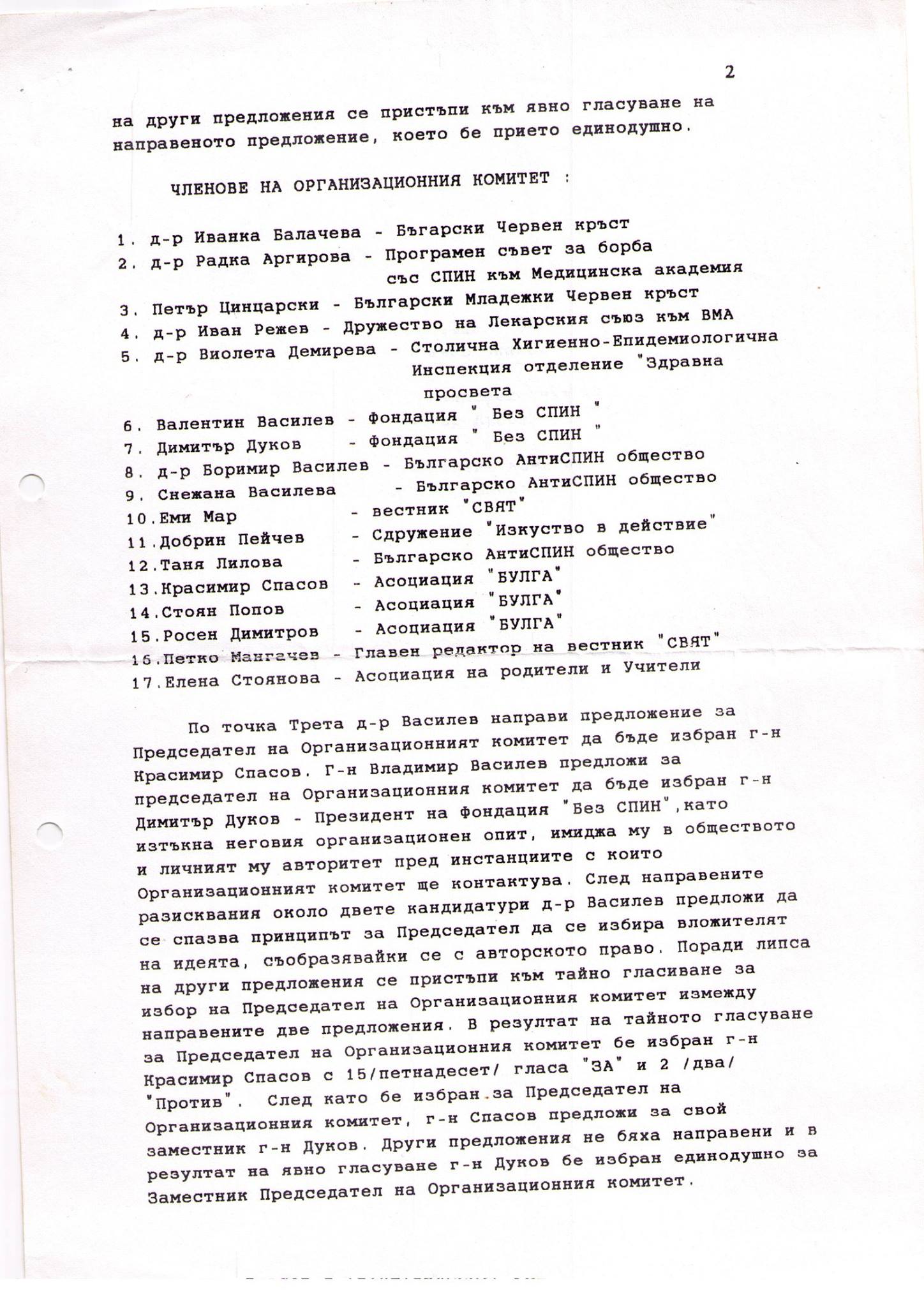 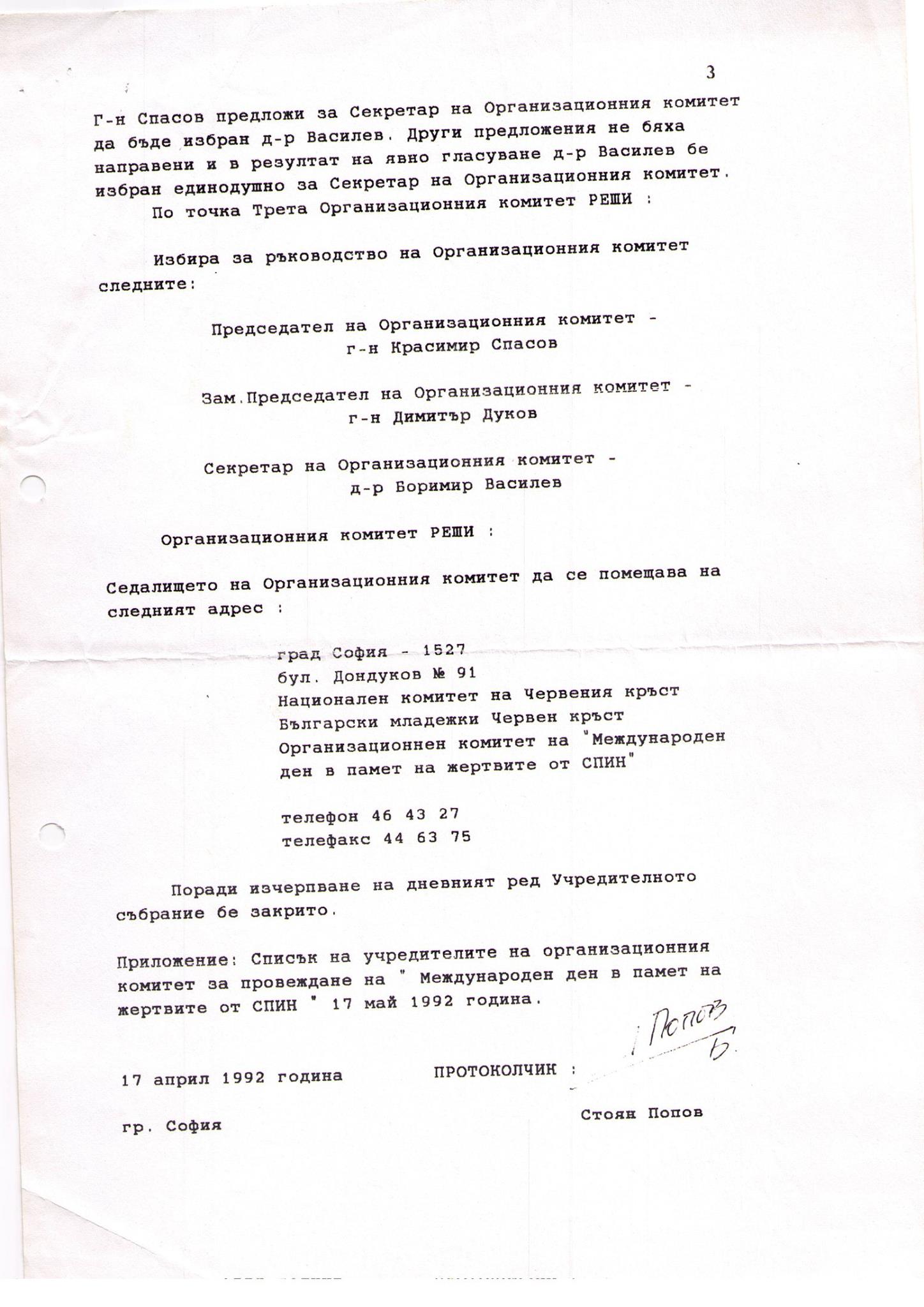